Viktor Kassai made history earlier today when he used the Video Assistant Referee, or VAR, to call a penalty against Orlando Berrio of Atletico Nacional. 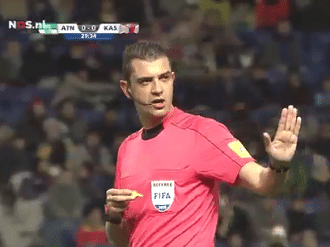 The historic call was made in the FIFA Club World Cup semi-final match between Atletico, of Columbia, and the Kashima Antlers. The Kashima team is the current Japanese Champion, and after Shoma Dai scored on the penalty kick, they went on to win the game handily by a score of 3-0.

Viktor Kassai is 41 years old and hails from the country of Hungary. His international career began in the year 2003. After appearing in the 2007 U-20 World Cup, Kassai went on to appear in the final games at the Olympics, the World Cup and Champions League competitions. With this one penalty call, Viktor Kassai has become a sports trivia fact in pubs and clubs around the world.

With the win, Kashima becomes the first Japanese team to reach the finals in the Club World Cup. The final game will be played this Sunday at International Stadium in Yokohama, Japan. Real Madrid or Club America will play tomorrow to see who will compete against the Kashima club.

Check out the Football – Soccer newsfeeds at Officials101

Read our 7 Trends to Watch for Referees and Umpires article.

The ‘Follow’ button below refers to Blog Posts only, not the posts within the newsfeeds.