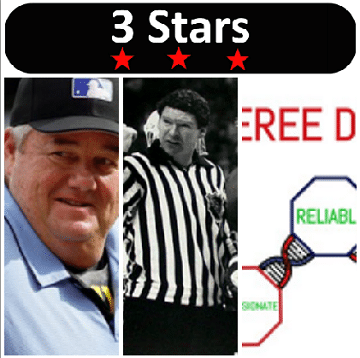 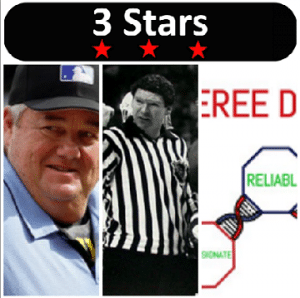 These are the 3 Stars selected for Week 25 in 2017. Maybe you agree and maybe you don’t, but read on below to find out why they were chosen. They were selected from posts that were added somewhere on the Officials101 website in the last 7 days. Stay tuned next week to find out who are the most notable referees, umpires and sports officials in the world today.

This was a great post made by Key Match Incident on Twitter this week. It sums up some of the key qualities that make up the character, or DNA, of Referees and Umpires. If you are respectful, coachable, fit, compassionate, reliable, consistent, confident, and a whole lot more, you are wanted by sports associations around the world. The Referee DNA post gets 3rd Star for the week.

Kevin Collins had a long and incredible career as an NHL Linesman. 28 years on the NHL ice, from 1977 to 2005, included trips to Stanley Cups, World Cups, All Star Games and Olympic Games. This week it was announced that Collins would be joining former NHL Referee, Bill Chadwick, in the US Hockey Hall of Fame. Scouting the Refs wrote another stellar article for us all about his career and the honour. Kevin Collins is 2nd Star this week.

Linesman Kevin Collins to be Inducted into US Hockey Hall of Fame https://t.co/RPRCL8enI3 pic.twitter.com/SqNqof1nrS

Joe West is one of the most interesting characters in the world of sports officials. An MLB umpire, movie star, country singer, union boss and great story teller. One thing I notice about Joe West encounters posted by random people who attend baseball umpire schools and conferences, they all love the guy. This week West was home plate umpire for his 5,000th MLB Baseball game. An incredible feat, not likely to ever be achieved again, Joe is on his way to surpass the most prolific umpire of all time, Bill Klem, who umpired in 5,375 games. If his knees hold out, Joe should be able to pass Klem in the 2020 season. Not much doubt about this one – Joe West, MLB Baseball Umpire, is 1st Star for Week 25.

Congratulations to MLB Umpire Joe West on umpiring your 5000th game. Best wishes from all the @Pirates and @MLB fans at Maz’s golf outing! pic.twitter.com/mVDuQVMEHZ

One of many great memories from umpire school. Joe gave an awesome speech but the conversation after this pic was even better. Thank you Joe pic.twitter.com/ANEDqMX7YO 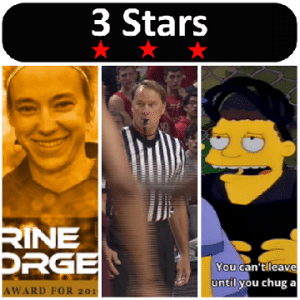