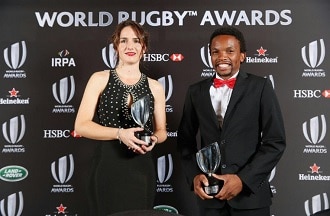 Spain’s Alhambra Nievas made history Nov. 13 when she won, along with Rasta Rasivhenge of South Africa, the Referee of the Year Award at the 2016 World Rugby Awards in London, the first woman to win the honour. “I’m so happy and I consider this a team achievement,” Alhambra told Officials101 after accepting the award.

Alhambra and Rasta were nominated for the prestigious award along with South Africa’s Jaco Peyper and Jérôme Garcès of France. Alhambra was also nominated for the award in 2015 alongside Jerome Garcès and Nigel Owens. Nigel Owens, who earned the honour last year, is considered by many to be the top referee in all of sports. 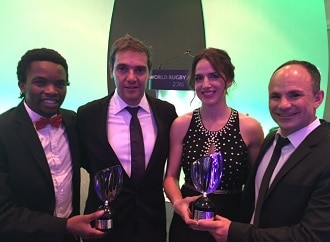 The elite ranks of rugby referees are a very close knit group. They are the best in their home countries and they take great pride in their selection to the international level.  The referees support, encourage and motivate each other and work very hard to be the best back home and abroad, making it a true honour to have one of their group recognized.

Alhambra and Rasta are friends (use the hashtag #refteam to follow along) and she is happy that two of their group can share the award. The pair were part of an elite team of international rugby referees that impressed the whole world at the 2016 Olympics in Rio, where the sport was played at the Olympic level for the first time since 1924. As one of the #RefsofRio, Alhambra was awarded the first ever Rugby Sevens women’s Olympic gold medal game while Rasta had the honour of officiating in the men’s gold medal match.

A friend’s encouragement to help out at a children’s rugby camp led to Alhambra taking up the whistle and she has certainly made her mark. She has refereed at a Women’s Rugby World Cup and in the Women’s Six Nations, and is a regular on the HSBC World Rugby Women’s Series Sevens Series.

Alhambra thanks all the people who have supported her and those she has learned from over the years – first as a player and then as an official. “All of them are behind this award,” she said.

The latest accolade will give Alhambra even more motivation to conquer new horizons – like her upcoming appearance in the international men’s match between Tonga and USA and the 2017 World Cup in Ireland in 15s rugby.

If you enjoyed this article you may also enjoy these Officials101 Collections: