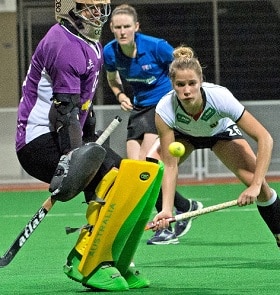 Officials101
Kylie Seymour
2016 Olympic Field Hockey Umpire
Speaks with us before the Olympics
Without Officials it is just a practice! 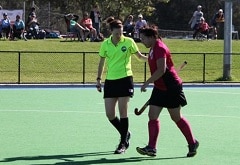 Kylie Seymour is one of the top field hockey umpires in the world. She is now in Rio de Janeiro for the 2016 Olympic Games as the hard work and dedication to her career has been rewarded with a trip to the top sporting event in the world. Kylie is very excited about having this opportunity to fulfill one of her dreams, and the anticipation of this special event has been a very thrilling time for her.

Back home in Sydney, Australia, Kylie is a school teacher known to her students as Miss Seymour. The kids in her school are eagerly watching their favourite ‘Miss Seymour’ as she has been working her way through the biggest tournaments in the world in preparation for the Olympic Games. Even when officiating at the Champions Trophy in London a few weeks ago, Kylie would stay in 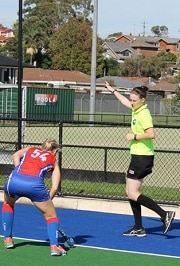 contact with ‘her kids’ and share her experiences through a blog she keeps for them. It is heartwarming to see the love in their relationship.

Even during the hustle and bustle of the last little while, Miss Seymour wanted to take a moment to talk about the support she has gotten from the students and the faculty at her school and in her community. “I would not have been able to achieve what I have in my umpiring career without the constant belief and encouragement from the school community at Our Lady Help of Christians in Rosemeadow, Sydney. This is my seventh year at the school and they have been so supportive of my dreams and goals. They have been with me on the journey from my very first Australian Hockey League event in 2010 and first international match in 2011 to the Commonwealth Games in Glasgow in 2014 and now the Olympic Games in 2016. I really cannot thank them enough.

Kylie Seymour began her umpire career as a young teenager looking to make $5 per game. She enjoyed it so much she decided to keep on umpiring and that decision has led to a very successful international career filled with friendships, travel and the excitement of being in the middle of some of the biggest games her sport has to offer.

John Robinson was Kylie Seymour’s coach and mentor when she was just a young hockey player. He was the first to encourage Kylie to become an umpire. Lisa Roach is a former elite umpire from Australia who had an amazing career of her own as Seymour rose through the ranks. Roach became Kylie’s friend and umpire mentor as she progressed onto the international stage. She helped to guide Seymour through the new experiences and teach her what it takes to be one of the best in the world. Kylie still remains very close to Lisa and affectionately calls her Roachy when she speaks of her friend and mentor. Lisa is 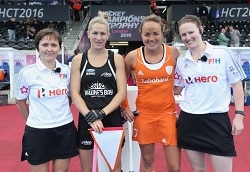 working as a video umpire during the Olympics

Kylie tells me that her favourite game is now “…the semi final I did with her [Roach] at Champions Trophy in Mendoza, Argentina 2014 where she retired – Netherlands vs. Argentina – the 2 best teams in the world!” I posted a link below to the Lisa Roach interview after that exciting match. There is also a link to an interview that Kylie gave where she talks about how important Lisa has been to her.

Since her first appearance on the international scene in 2011, Kylie Seymour has had the opportunity to officiate some of the top games at the top venues around the world. Here is a list of just a few of her many accomplishments: 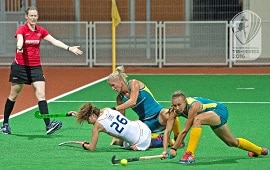 Things have been a little hectic for Kylie this year after just returning home from London and the 2016 Champions Trophy and then immediately continuing on with her Olympic preparations. The big days are upon us now and yet Kylie still took a few moments out of her busy schedule to send us a few recent photos and share some thoughts. She is bubbling with energy and very excited and it has been fun watching her progress through the year and chatting when she had the chance.

Kylie Seymour is a wonderful young lady and she has been a real treat to chat with. Congratulations Kylie on your appointment to the Olympics and all the future thrills that are coming your way. Thank you for sharing with us!

Thank you for reading!
Jim

Here are a number of links to Kylie and many of the articles I used as background reading.

Kylie and Lisa in Argentina

Another Kylie Seymour Olympics Interview with a local newspaper

If you enjoy this article, you also may enjoy these 101 Collections:

You may also enjoy our chats with these Olympics Officials: