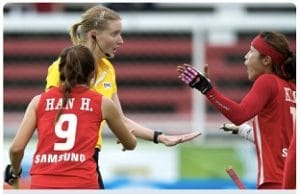 Officials101
Fanneke Alkemade Field Hockey Umpire
A little chat before heading to the Olympics
Without Officials it is just a practice! 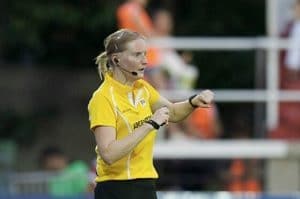 Fanneke Alkemade is an elite international field hockey umpire from the Netherlands. She has been selected to be an umpire in the Olympics next month in Rio de Janeiro. Many years of hard work and dedication are about to be rewarded with a trip to one of the greatest sports event on the planet.

Fanneke works in the in the pharmaceutical industry doing research and writing papers about drug safety. Currently she is promoting research into Parkinson’s disease as chairwoman of Stichting Alkemade-Keuls. She speaks Dutch, German and English. When she is not busy travelling the world umpiring, she volunteers as a mentor with new umpires working in their first games. It helps the newcomers to get comfortable and build confidence when they first get started.

A number of weeks ago, before I had the blog added to the website, I had the pleasure of a short conversation with Fanneke about the upcoming Olympics in Brazil.

This is Fanneke’s first visit to the Olympics. She has trained hard and travelled many miles to gain the experience and composure it takes to umpire in an event as big as this. Only the very best are even considered for the job and it is a very special appointment that will bring a lifetime of memories. She is “Feeling very excited but also very humble” for the honour of her appointment and the fulfillment of

one of her life dreams.

“Sometimes it still feels unreal that within a couple of months I am an Olympian and umpiring at the Olympic Games becomes a reality!” she told me. The feelings of excitement for the Olympic experience are just as real to the officials as they are to the athletes participating in the games. It is an opportunity of a lifetime that doesn’t come around very often.

This is “where passion, hard work, dedication and fun can lead to” is what Fanneke has to say to the umpires who are working so hard to make their Olympic dreams come true. It is only a few short weeks before Fanneke’s Olympic own dreams will be played out in Rio de Janeiro and she will have a lifetime of stories to share with those new umpires she is helping.

Experience so far, but not limited to:

Experience so far, but not limited to:

If you like this article you may also enjoy these newsfeeds:

You may also enjoy these chats with 2016 Olympic referees and umpires:

Links to other articles used as background reading:

Please take a moment to visit our advertisers, affiliates and supporters. Thank you.

The ‘Follow‘ button below is referring only to the blog posts not to all the newsfeed posts.