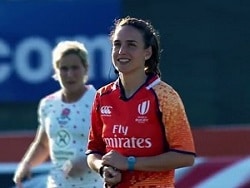 Officials101
Alhambra Nievas Rugby Referee
Chats with us before going to the Olympics
Without Officials it is just a practice!
2016 Gold Medal Referee

Congratulations Alhambra on being awarded the 1st ever Rugby Sevens Women’s Olympic Gold Medal Game. I am so happy for you! Jim Game Results

Alhambra Nievas is one of the top elite rugby referees in the world. Male or female.

From Granada Spain, Alhambra is part of a very strong team of international referees that will be representing the sport of rugby in the 2016 Olympic Games. This will be the first time rugby has been played at the Olympics since 1924, and Alhambra and her fellow referee team have all been working very hard to be prepared for the historic return of the sport to the Games.

Between, and during, the 6 Nations and the 7’s World Series, leading up to the excitement in Rio, Alhambra has been 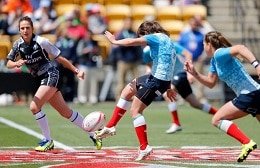 working hard at training with the other Olympic Elites whenever they find an opportunity. Next year will be the 2017 Rugby World Cup in Ireland and a new challenge in the fifteens once the Olympics are finished, but Alhambra is taking everything one step at a time and proving her excellence with every step she takes.

Alhambra was honoured with a nomination for the 2015 World Rugby Referee of the Year Award along with Jerome Garces and Nigel Owens. Not only is this special because it is so rare for women to be recognized on the world stage, but it is particularly remarkable because Nigel Owens is generally regarded as the top sports official in the world across all the different sports. Owens eventually won the award that night, but Alhambra’s nomination was such a huge step forward for female officials in all sports. It was a tremendous achievement by this very friendly and outgoing young lady that was certainly noted by women all over the world. 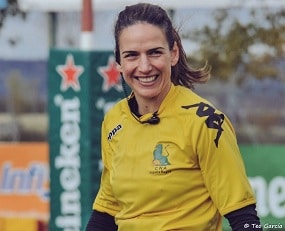 Alhambra is also well aware of the responsibility that comes along with the honour of her appointment. “It is so big for all athletes. It is a great opportunity for all of us and now our goal as a Team is to arrive in the best conditions to contribute to a successful and amazing tournament, showing the world the unique essence of our sport.”

These are exciting times for every athlete who has prepared for so many years to make it to the 2016 Olympic Games. The officials are no exception. Only the very best in the world are going to be in the arenas of Rio de Janeiro, and Alhambra Nievas is amongst them. She has earned her spot with a lot of hard work and is a fantastic leader for young officials who will be watching the games and dreaming of the day when they get their chance to run with the best!

A fantastic short video interview with Alhambra by World Rugby is here
There is a nice article, translated from Spanish to English, about the Referee of the Year Nomination here.

Read these Officials101 chats with officials attending the 2016 Olympic Games:

The ‘Follow’ button below refers to Blog Posts only, not the posts within each newsfeed.