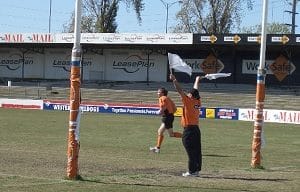 Our AFL Umpires Resources and Collection is filled with posts about the Australian Football League and the many connecting associations. Links to contacts, rules, training and the personalities of AFL Umpires at all levels.

You can read more after the collection below. But first, take a scroll through our videos, links and collection of posts. Have fun!

What is AFL? Aussie Rules Explained

A Basic Guide for the AFL Umpires – Hand Signals:

Get in the Game video from Umpire AFL

Please be sure to visit our friends, sponsors and supporters. Thanks!

Australian Rules Football, sometimes called “Aussie Rules”, “AFL” or just “footy” is a game first played in Australia in 1858 but having its roots in Gaelic Football, Rugby and a game played by the indigenous Australians called Marngrook. Today, Aussie Rules is the largest professional sport in Australia and is played in many countries throughout the world including Canada, USA, South Africa, the UK, Papua New Guinea, Ireland and Japan. 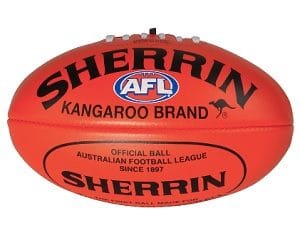 kicking the ball through tall upright goal posts located at the end of the field. A goal is worth 6 points while a “behind” (worth 1 point) is scored where a kick travels between a goal post and the adjacent behind post or where the ball is carried or forced across the goal line.

Teams of 22 players (of which 18 are on the field at any one time and the other 4 are classed as “interchange” players) contest matches which generally go for 80 minutes of playing time plus “time on”. There are no set regulations about ground size and footy is generally played on ovals about 160 metres long and 110 metres wide. The game is played at all levels from professional, to community or grass roots level through to junior age groups which generally use modified rules, a smaller ball and play on a smaller ground. While teams or clubs for men and juniors are well established in suburbs and towns throughout the country, footy for women and girls is possibly the fastest growing sport in Australia.

The ball is moved from player to player by either running with it, kicking it or through a “handpass” where the ball is held in the open palm of one hand and punched with the other hand using a clenched fist. Throwing the ball incurs a penalty in the form of a “free kick” to the opposition and the ball must be bounced every 15 metres by a player running with it. 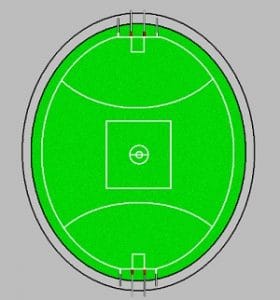 Why People Love It

Unique features of the game, apart from the ball and the scoring system, are the long kicking, spectacular “marking” (or catching) of the ball, aggressive tackling, the fact that players wear no protective equipment and the absence of set positions for players. To excel as a player requires a unique blend of endurance, power, agility, intuition and ball skills. Footy is a fast and exciting game with high scores, frequent physical clashes, amazing team work and highly skilled kicking and marking.

Because of the size of the field and the speed of the game, an Australian Rule Football games requires several umpires with 3 distinct roles :

Field Umpires (generally 2 at junior and grass roots levels and 3 at elite levels). Field Umpires adjudicate on rules, awarding free kicks for infringements. They also call stoppages (“ball ups”) when play has reached a stalemate, bounce or throw-up the ball to recommence play and confirm that play has been “all clear” when a goal is scored.

Boundary Umpires (generally 2 at junior and grass roots levels i.e. one on each side of the oval and 3-4 and elite levels). Boundary umpires determine whether the ball is in bounds or out of bounds, throw the ball in after it has gone out of bounds and return the ball to the field umpire in the middle of the ground after a goal has been scored.

Goal Umpires (one in the goals at each end of the oval). Goal Umpires are responsible for adjudicating on scoring by determining whether (and how) the ball has passed between the posts and over the goal line.

Special thank you to Warren Hosking , who wrote the content for this page. Whenever I have questions about the AFL, Warren, or Wazza, as he is known to his friends and family, is the man I turn to. Thanks Wazza! You rock! 😎 Jim

The ‘Follow’ button below refers to blog posts only. not posts within the collections.