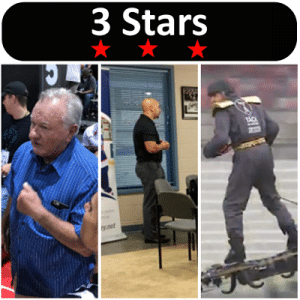 These are the 3 Stars selected for Week 37 in 2017. Maybe you agree and maybe you don’t, but read on below to find out why they were chosen. They were selected from posts that were added somewhere on the Officials101 website in the last 7 days. Stay tuned next week to find out who are the most notable referees, umpires and sports officials in the world today.

The Flying Ball Delivery at the Portuguese Cup earlier this year is a popular post. At least by the 101 standards anyways. 🙂 I was heavily influenced in this selection by the followers on Twitter. It is a repost from a few months ago so I was a bit surprised to see it get a few retweets although I suppose I shouldn’t have been. It was one of my personal favourite posts so why not? It is an interesting peak at future possibilities. I suggest a look at my own vision of the game of Quidditch in the years to come, but why not football? Soaring above the play would certainly provide an enhanced view of the field for the referees. Soccer, rugby, fieldhockey are all sports that could benefit from a higher perspective for the officials. The Flying Ball Delivery guy on a drone gets 3rd Star for this week.

Sean Raphael is a Hockey Referee in my home province of British Columbia in Canada. He is also the boss of the BC Hockey Referees and he was talking to the RIC’s (Referees in Chief) of Okanagan hockey in Salmon Arm last weekend. I attended that meeting to hear him speak and learn what I could from him while he was in Salmon Arm. That pile of hair at the front of the photo is the back of my head. We talked a lot about recruiting, training and retaining referees. Sean Raphael, Hockey Referee, did a great job trying to teach me and others to guide the future officials of the game, and is 2nd Star for this week.

Ed Rush Sr. is a Basketball Referee. He spent over 35 years with the NBA and is a wealth of knowledge regarding all things basketball. Senior Rush is very active teaching and sharing his experiences with all levels of the game. His energy and willingness to give back to the game is kind of a special thing to watch in the business of sports officials, and I think that basketball referees should do everything they can to get some time with the man. Junior Rush shares his love, respect and admiration for his Dad in this post. Ed Rush Sr., Basketball Referee, is 1st Star for Week 38.

My Dad at his BEST. Literally no one better in the world at teaching/training basketball referees than Ed Rush Sr. (32 years in the NBA…) pic.twitter.com/qZbeiyNkbd