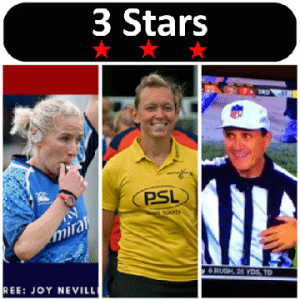 These are the 3 Stars selected for Week 34 in 2017. Maybe you agree and maybe you don’t, but read on below to find out why they were chosen. They were selected from posts that were added somewhere on the Officials101 website in the last 7 days. Stay tuned next week to find out who are the most notable referees, umpires and sports officials in the world today.

NFL Football Referee, Pete Morelli had a pretty weird call to make this week when the Broncos played the 49ers. There were 5 separate players who all got a penalty on the same play and Morelli had to stop himself from laughing out loud at the absurdity. I, on the other hand, have no constraints to laughing at the situation and had a pretty good chuckle. A good chuckle always makes it to the shortlist of stars of the week. 3rd Star, Pete Morelli, NFL Football Referee.

Sarah Wilson is a FieldHockey Umpire from Scotland. Wilson is one of the top umpires in the game today and has worked a number of top international matches including a very strong 2016 Olympic tournament in Rio de Janeiro. This week she has been awarded the European Hockey Federation Women’s Final between Belgium and the Netherlands, being held in Amsterdam. Sarah Wilson, FieldHockey Umpire, gets 2nd Star this week.

Massive congratulations to @Wilson88Sarah on being appointed as Umpire for the @eurohockeyorg final in Amsterdam. pic.twitter.com/NiTWO4y5yQ

Joy Neville, Rugby Referee, has been awarded the Women’s Rugby World Cup Final being played in Belfast, Ireland. The match, between the New Zealand Black Ferns and the England Roses, is a huge achievement for the former player turned referee. With such a strong team of officials at the elite level of rugby, this assignment is not an easy one to come by. Joy Neville, Rugby Referee, is the 1st Star for Week 34.