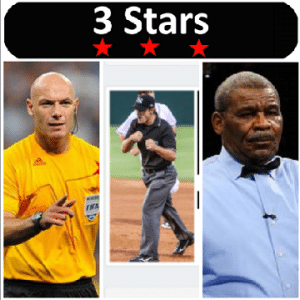 These are the 3 Stars selected for Week 33 in 2017. Maybe you agree and maybe you don’t, but read on below to find out why they were chosen. They were selected from posts that were added somewhere on the Officials101 website in the last 7 days. Stay tuned next week to find out who are the most notable referees, umpires and sports officials in the world today.

Robert Byrd is a Boxing Referee who has just been assigned the ring for the August 26th fight between Conor McGregor and Floyd Mayweather. There has been a lot of hype around this fight as it is expected to be the biggest pay per view event in history and each fighter is looking to earn $100 million or more. The 74 year old Byrd will earn about $25,000 and the judges will make about $20K. For getting the prime fight assignment of the year, Robert Byrd, Boxing Referee, is 3rd Star for the week.

Robert Byrd will be referee in Mayweather, McGregor. pic.twitter.com/akgMsaL2xa

Tom West is a Baseball Umpire from Australia. He takes a moment to participate in this great podcast interview. West talks about his journey to become a Major League Baseball Umpire and how his quest has taken him a half a world away from home. Tom West, Baseball Umpire, is 2nd Star this week.

Tom West tells of the challenges and journey he has experienced in his attempt to umpire Major League Baseball. https://t.co/enlpsIOErL

Howard Webb is probably one of the most recognizable Football Referees of all time. The former World Cup Referee gives a great podcast interview here talking about a wide variety of interesting topics including his life away from the game and his new job with the MLS. As the man in charge of implementing the VAR Technology for the league, Webb has great insight into the future of soccer in North America and the world. Howard Webb, Soccer Referee, is the 1st Star for Week 32.