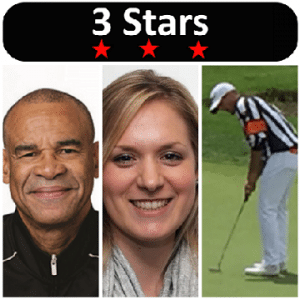 These are the 3 Stars selected for Week 31 in 2017. Maybe you agree and maybe you don’t, but read on below to find out why they were chosen. They were selected from posts that were added somewhere on the Officials101 website in the last 7 days. Stay tuned next week to find out who are the most notable referees, umpires and sports officials in the world today.

Garrett Rank is an NHL Hockey Referee who also happens to be a pretty good golfer. At the 2017 RBC Canadian Open, the same place that Arnold Palmer won his first professional tournament, the 7th hole had a hockey theme. They called it The Rink, and Rank certainly looked at home. He shot par on the hole for both of his rounds. Here is a great shot of him rocking the referee jersey and draining the putt. Garrett Rank, Hockey Referee, is 3rd Star this week.

Joy Johnston was the Referee in the 2014 Olympic gold medal hockey game between Canada and the USA. Now she is the Referee In Chief of Ice Hockey UK. As the IHUK moves toward a very promising future, it has made great efforts to improve their officiating environment and culture. Having Johnston, one of the top referees in the world, leading the way, and introducing their new training platform can only be a sign of even better things to come. Joy Johnston, Hockey Referee, is 2nd Star.

Danny Crawford is an NBA Basketball Referee. Imagine, if you will, please, what it would be like to officiate the NBA Finals. The intensity and the excitement. For almost any basketball referee on the planet, this would be the ultimate dream come true. A memory to cherish for all time. Can you also imagine achieving this dream 23 times? In a row? Basketball is losing a legend as Danny Crawford has announced his retirement, and officials everywhere are wishing him their congratulations and accolades. The announcement made by his home team, the NBRA, was the one chosen to share the announcement with the followers of Officials101. Danny Crawford, Basketball Referee, is the 1st Star for Week 31.

Dan Crawford, one of the most accomplished referees in NBA history, is retiring.

Congrats to Danny on an incredible career! pic.twitter.com/yZYgPWof0m