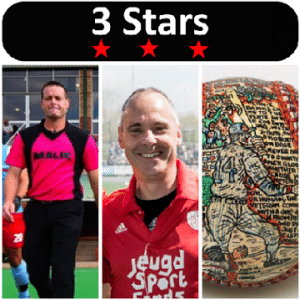 These are the 3 Stars selected for Week 30 in 2017. Maybe you agree and maybe you don’t, but read on below to find out why they were chosen. They were selected from posts that were added somewhere on the Officials101 website in the last 7 days. Stay tuned next week to find out who are the most notable referees, umpires and sports officials in the world today.

George Sosnak was a Baseball Umpire. He lived from 1922 to 1992 and has left an amazing legacy of Folk Art that is unlike anything else ever seen. In a fashion similar to baseball cards, Sosnak would draw pictures of players and their stats on baseballs. It is estimated that he drew on somewhere between 800 and 3000 baseballs and that many of his creations will never see the marketplace as they are proudly displayed in family collections of the players depicted. For sharing this amazing talent and the history of the game, George Sosnak, Baseball Umpire, is 3rd Star for the week.

%tumpic #HTE The Baseball as Folk Art Umpire George Sosnak was good at his chosen profession but he was better a… https://t.co/EcuvUUo7Ng pic.twitter.com/TG3pn4wd7G

Roel van Eert is one of 2 retiring FieldHockey Umpires posted by 101 this week. After a 14 year international career that included 84 matches, van Eert worked his final game with Fanneke Alkemade who is one of the top female umpires in world today. Watch the FIH video as Roel shares some of his favourite highlights at World Cups and Olympic Games. Roel van Eert, FieldHockey Umpire, is the 2nd Star this week.

John Wright is the other retiring FieldHockey Umpire for the week. After a 22 year career and over 200 matches, Wright has reached legendary status amongst his fellow umpires. The 5 Olympic Games and 4 World Cups he appeared in may have something to do with that. Wright was in the middle for the 2016 Olympic Gold Medal game in Rio de Janeiro, his second gold appearance. A true leader in the sport of fieldhockey, he will surely be missed by many. John Wright, FieldHockey Umpire, is the 1st Star for Week 30.