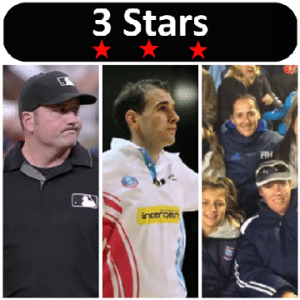 These are the 3 Stars selected for Week 29 in 2017. Maybe you agree and maybe you don’t, but read on below to find out why they were chosen. They were selected from posts that were added somewhere on the Officials101 website in the last 7 days. Stay tuned next week to find out who are the most notable referees, umpires and sports officials in the world today.

Michelle Joubert is an international Fieldhockey Umpire extraordinaire. After a long history at the pinnacle of her profession, Joubert took charge of the 2016 Women’s Olympic Gold Medal match in Rio de Janeiro. Her passion for the sport and knowledge of the game are legendary and it is great to see her hanging out with the future stars and inspiring new dreams. We have a page dedicated to Michelle Joubert here at 101 so you can read up on her later if you like. For sharing her love of the game with those ho count the most, Michelle Joubert is 3rd Star for the week.

Jono Bredin, Rugby Referee that was also once one of the top international Netball Umpires in the world. It created a bit of a stir a couple of years ago, when Bredin announced he was retiring from Netball to focus his attentions on becoming a Rugby Referee. As you can see in this post, things are progressing nicely. For leading the way and showing sports officials that their skills are transferable, and for having the drive and determination to prove it, Jono Bredin, Rugby Referee, Netball Umpire, is 2nd Star.

Dan Bellino is an MLB Baseball Umpire. Or is he? A lot of speculation about his true identity after this post was made. Whether it is Bat signals in the sky or Umpire signals on the field, every once in a while a post comes along that is just fun. When that happens, we let you know. For giving me the smile of the week, Batman, er, uh, Dan Bellino, MLB Baseball Umpire, gets the 1st Star.

Just when I thought I’ve seen everything, umpire Dan Bellinois wearing a Batman shirt under his uniform. @PhilHecken @UniWatch pic.twitter.com/z36ry6l2Gt