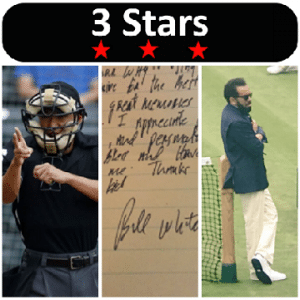 These are the 3 Stars selected for Week 27 in 2017. Maybe you agree and maybe you don’t, but read on below to find out why they were chosen. They were selected from posts that were added somewhere on the Officials101 website in the last 7 days. Stay tuned next week to find out who are the most notable referees, umpires and sports officials in the world today.

When you are so cool you can just hang out at the post for a bit at Wimbledon. Kader Nouni is a Tennis Umpire. When he speaks, Twitter swoons. With a deep, smooth voice, Nouni calls out Love – 30 and people everywhere just melt. It is actually quite a shocking phenomenon as far as the Officials101 search feeds are concerned, to see the love that tennis fans have for the man. Not just the fans either. A few minutes on youtube will show some of the top players in the game gushing and blushing when Kader Nouni calls their name. For having that umpire swagger and just owning it, Kader Nouni gets 3rd Star. If you want more Wimbledon Umpire and Tennis Posts you can find them all here.

You’re cool, but you will never be as cool as this umpire at Wimbledon. #Wimbledon2017 pic.twitter.com/ysdL1BRG01

Bill White is a Softball Umpire who is having an impact on the lives of young people. Although this is a common trait amongst sports officials, it is normally done in small quiet ways where it is hardly noticed by others. In this case, we get an chance to see the type of small acts that are done by special leaders throughout the sports world. This was a great example of a sports official who makes a difference and yet remains faceless. Bill White, Softball Umpire, gets 2nd Star for being someone who cares and takes a moment to show it.

my favorite umpire sent me this for graduation and made my week. there’s so much character building that happens on that field pic.twitter.com/tqP8JpIR2t

Taka Matsuda is a Baseball Umpire who is working hard to become the first umpire from Japan to work in the MLB. This is a great article that shows the type of grit and determination that some sports officials need to possess to make the long climb to the top. Matsuda not only left his home to pursue his dreams in the United States, but he also goes to Australia for their season as well. If you are like this guy, you will probably be alright in the world. Taka Matsuda, Baseball Umpire, is 1st Star for Week 27.