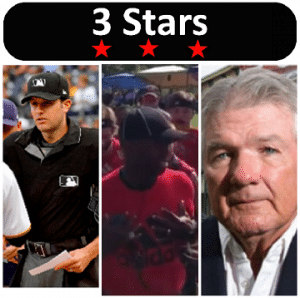 These are the 3 Stars selected for Week 26 in 2017. Maybe you agree and maybe you don’t, but read on below to find out why they were chosen. They were selected from posts that were added somewhere on the Officials101 website in the last 7 days. Stay tuned next week to find out who are the most notable referees, umpires and sports officials in the world today.

Adrian Carson is also a football referee. He is a high school referee for a 7 on 7 touch football tournament. You can watch him here giving an inspiring speech before the start of his game about sportsmanship and competing. Great leadership and coaching skills are common traits shared by officials across all sports and it is great to see how it can impact young minds. Adrian Carson is 2nd Star.

John Tumpane is a MLB Baseball Umpire who is being hailed as a hero for saving the life of a woman in Pittsburgh before his game the other night. This is an amazing story that completely took over the 101 umpire search feeds this week. It was almost impossible to find umpire postings from any other sport and it is easy to see why. Tumpane even received a standing ovation for his heroics which is rather unusual in the world of sports officiating. As predicted by Rich McLean, John Tumpane is definitely the 1st Star this week.