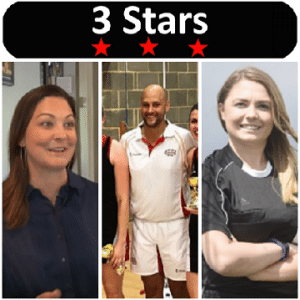 These are the 3 Stars selected for Week 24 in 2017. Maybe you agree and maybe you don’t, but read on below to find out why they were chosen. They were selected from posts that were added somewhere on the Officials101 website in the last 7 days. Stay tuned next week to find out who are the most notable referees, umpires and sports officials in the world today.

Vikki Allan, Scotland’s Youth Ambassador for Refereeing, is about to climb Mount Kilimanjaro to raise awareness and create opportunities for women and girls to referee the game of football. A first year FIFA qualified Assistant Referee, Allan is a force in her home association, and I don’t think this is the last we are going to hear from her. Vikki Allan, Football Referee, is 3rd Star this week.

Gary Burgess is one of the world’s top International Netball Umpires. He made a trip back to his roots this week and caused a bit of a sensation for his visit. One of his stops was to officiate the Cup Final in one of his old stomping grounds, the Bedford Netball League. It is great to see when elite sports officials can give back to the people who helped make them who they are. Gary Burgess, Netball Umpire, is 2nd Star for being a classy guy.

I will be forever indebted to Bedford Netball League for the solid foundation they gave me. I went back to umpire the Cup Final today.#magic pic.twitter.com/d7ZNgfAn5y

When you’re stuck for an umpire and your mate causally brings along International umpire @GaryBurgessIUA #netball pic.twitter.com/JgSXMzRGkX

Lauren Holtkamp is an NBA Basketball Referee who also spent some time giving back to her roots. This was a great interview with Holtkamp by the Peach Belt Conference giving a glimpse at life in the big leagues. She shares the path she took to get there and some of the lessons she has learned along the way. Lauren Holtkamp, NBA Basketball Referee, is the 1st Star for Week 24.