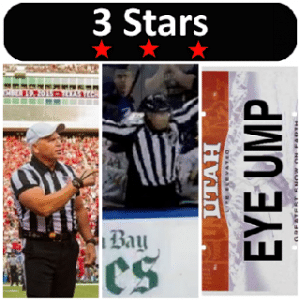 Officials101 is always on the lookout for posts that are unique, fun and interesting. When Twitter follower, Fire Eye Umpire, posted this photo of his new Utah license plate, it was irresistible and had to be shared on our website. For ingenuity, creativity and having the fun character to go get it done, this post is the 3rd Star for Week 2.

NHL Linesman, Jonny Murray, was working the lines in the game between the Buffalo Sabres and the Tampa Bay Lightning this week. When Tampa Bay’s Gabriel Dumont and the Sabre’s captain, Brian Gionta came together in front of the Lightning’s bench, Murray was trapped. With no place to go but up and over the boards, he ended up in the Tampa Bay bench. Like a true professional, the unflappable Murray kept his focus and made the call from the bench. This onside call earned Jonny Murray the 2nd Star.

Linesman gets hit into the bench, still makes the call pic.twitter.com/Aa24ZOOJyq

When Big 12 football referee Mike Defee started the week his focus was all about preparing for the College Football Playoff National Championship game between the Alabama Crimson Tide and the Clemson Tigers. Defee had no idea that his workout and fitness program would instantly make him the most recognizable college football ref in the USA. Twitter pretty much exploded when football fans reacted to the huge biceps between the stripes and the whistle. Every time Defee made a call, the Officials101 search feeds were overloaded with comments and photos as sports fans shared their awe and admiration. I am not too sure if anyone noticed, but the game was a real thriller and the Tigers launched an incredible comeback to beat the Tide 35 – 31 in what some are calling the best championship game in history.