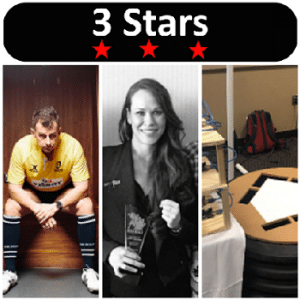 These are the 3 Stars selected for Week 18 in 2017. Maybe you agree and maybe you don’t, but read on below to find out why they were chosen. They were selected from posts that were added somewhere on the Officials101 website in the last 7 days. Stay tuned next week to find out who are the most notable referees, umpires and sports officials in the world today.

I like to include a non-human element to the 3 Stars whenever I get the opportunity. The idea is to highlight an interesting topic that is relevant to Referees and Umpires. I admit that I often fudge the guidelines a little bit when there are cake or cookies involved because I want some, but this week, the post is of the non-edible variety. These college students are trying build a Ball and Strike Counter for Baseball and Softball Umpires. Many baseball fans are worried that Umpires will be replaced once these machines are perfected, which is just not so. The human umpires will still be there calling tips, fouls and plays at the plate. One day, ‘Robot Umpires’, as they are often called, will become just another Tech Tool for Sports Officials. Watch for this technology to improve quickly in the future. For now, The Ball and Strike Counter gets 3rd Star and starts the hashtag #bscounter.

Jennifer Huggins, Boxing Referee, makes another appearance in the 3 Stars by becoming the Top Boxing Official in Canada. Although Huggins is a real force outside the ring with her entrepreneurial spirit and charity work, it was nice to see here work inside the ring being recognized. This week. Jennifer Huggins is 2nd Star.

#FlashbackFriday To being awarded 2016 Official Of The Year alongside Female & Male Boxers Of The Year @MandyBujold & @ArthurNoxchi
pic.twitter.com/Y3WXYLm4tY

Nigel Owens, Rugby Referee, is in a class of his own. In the World of Sports Officiating, Owens is probably the most highly respected referee on the planet, in any sport. His control of games is legendary and, for me, it comes as no surprise that he is appointed the Champion’s Cup Final. Nigel Owens is posted on Officials101 more than any other official and I doubt this will be his last appearance in the 3 Stars for 2017. Keep an eye open for that down the road. Today, Nigel Owens gets 1st Star.

ICYMI: Nigel Owens will referee his 100th tournament match when he takes charge of this season’s #ChampionsCup final https://t.co/bU9z3GJ6fa pic.twitter.com/NytoHpNUIL