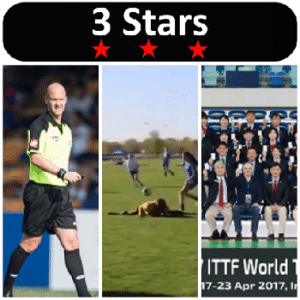 These are the 3 Stars selected for Week 17 in 2017. Maybe you agree and maybe you don’t, but read on below to find out why they were chosen. They were selected from posts that were added somewhere on the Officials101 website in the last 7 days. Stay tuned next week to find out who are the most notable referees, umpires and sports officials in the world today.

White Cards for Peace is a silent plea for calm in a world that needs sport more than ever. Sports bring us together as people. We share joy, excitement and awe at hard fought battles between our favourite teams. Our teams come from all walks of life and every corner of the globe. We don’t care about little things like social status, skin colour, religion or the neighbourhood our teams grow up in. We are just proud to be a part of something bigger than ourselves. In the middle of it all are the referees, umpires and all of the sports officials keeping the peace. White Cards for Peace from the International Table Tennis Federation is 3rd Star this week.

Jerry Nash is a 45 year old soccer referee from Iowa who just reacted to a situation without even thinking about it. Nash was reffing a game this week when a ball was kicked straight at him. With catlike reflexes he dropped to the ground by doing the splits out to the side, avoiding the ball completely, and then popped straight back up. All in the blink of an eye. This little video clip went viral and will be on highlight reels for years to come. Jerry Nash, Soccer Referee, for following his fitness regimen and stepping up the game, is 2nd Star.

Quick-thinking referee does an impressive split to avoid interfering with the game ball in a women’s youth soccer game in Iowa. pic.twitter.com/a5knJYRFT2

This week, Anthony Taylor was announced as the referee for the FA Cup Final to be played on May 27, 2017 between Chelsea and Arsenal. Being the referee for this game at Wembley Stadium has long been a dream for the 38 year old Taylor. The FA Cup Final is the pinnacle game for players, managers and referees in the English Premier League so for his ‘Dream Come True’ appointment, Anthony Taylor is 1st Star for Week 17.