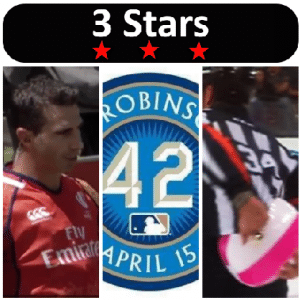 These are the 3 Stars selected for Week 16 in 2017. Maybe you agree and maybe you don’t, but read on below to find out why they were chosen. They were selected from posts that were added somewhere on the Officials101 website in the last 7 days. Stay tuned next week to find out who are the most notable referees, umpires and sports officials in the world today.

The sport of hockey is fast, it is intense and it takes a lot of focus for referees to stay with the game. An NHL Playoff game is faster and even more intense than most, so when Brad Meier had to deal with this beach ball in the heat of the action the fans had a good laugh and gave him a cheer. So did I. For having the focus to think fast and stuff a beach ball under the back of his jersey during the play, Brad Meier gets 3rd Star for Week 16.

Jackie Robinson Day. On April 15, 1947, Jackie Robinson made his professional baseball debut with the Brooklyn Dodgers. When Robinson stepped onto the field that historic day he broke through a barrier of prejudice and ignorance and led the way for athletes of colour to play in the big leagues. To honour the strength and courage of this special man, Major League Baseball has retired his number 42 from the league, so no other player on any team, wears it ever again. Except on one day each year, April 15, when every player and every umpire wear the Number 42 as symbol to show that we are all the same. 2nd Star this week goes to Jackie Robinson Day.

Craig Joubert has been one of the top international rugby referees for a number of years and officiated in many of the sports most crucial games. Since his appearance at the 2016 Olympic Games, Joubert has been attacking a new challenge as the Referee Talent Development Coach for World Rugby and his students are thrilled to have him. This is a great video of Joubert, or Joobs, as his charges call him, talking about his new job. Craig Joubert, Rugby Referee, is 1st Star for Week 16, 2017.