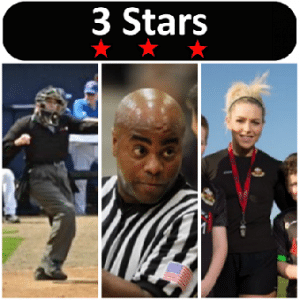 These are the 3 Stars selected for Week 13 in 2017. Maybe you agree and maybe you don’t, but read on below to find out why they were chosen. They were selected from posts that were added somewhere on the Officials101 website in the last 7 days. Stay tuned next week to find out who are the most notable referees, umpires and sports officials in the world today.

The BBC had a very inspiring news feature about Caris Hedd Bowen this week. Bowen is a young mum who has beaten her cancer and has used the experience to grow and inspire others. She chose to become a rugby referee as a way to accomplish her goals and encourage others at the same time. For her drive, ambition and leadership, Caris Hedd Bowen, Rugby Referee, gets 3rd Star for the week.

Watch: The 25-year-old mum of two who took up rugby refereeing after beating cancer https://t.co/6kGYTpP6MJ pic.twitter.com/TOW0QXkvNI

It is March Madness time for NCAA Referees as the future stars of the game gather in Phoenix to determine which school becomes the reigning champions. Basketball referee, Jeffrey Anderson, is a veteran of many March Madness tournaments, and this year, with his hometown behind him, he has made it to the Final Four round. For this selection, Jeffrey Anderson is the 2nd Star.

Perry Barber is a Baseball Umpire who has been a champion for female umpires for a long time. What an amazing accomplishment for Barber who, after 32 years in behind the plate, was given the job of Umpire Manager and became responsible for an entire team of professional level female umpires. For her leadership and persistence, Perry Barber is the 1st Star for Week 13 in 2017.