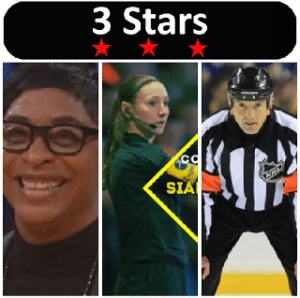 NHL Hockey Referee #20, Tim Peel was back on his home turf in St. Louis this week, wearing the stripes in front of 46,000 fans at the 2017 NHL Winter Classic outdoor game in Busch Stadium. The stadium is normally home to baseball’s St. Louis Cardinals in the summer months but was converted to a hockey rink for this years’ showcase NHL game between the St. Louis Blues and the Chicago Blackhawks on January 02. As a Cardinal’s fan in the off-season, Peel was pretty excited to use the Umpire’s change room to prepare for the big night. St. Louis won the game 4-1.

Refereeing the Winter Classic to be a highlight for referee Tim Peel, via @jprutherford: https://t.co/FXESnX3l4d pic.twitter.com/K1qTbNzRmN

Sian Massey-Ellis is a football referee in England. Based in Coventry, Massey-Ellis is a FIFA listed assistant referee who has worked Premier League and FA matches, including UEFA Euro and Champion’s League finals, and an impressive list of top women’s matches. Last week she was honoured with the Queen’s MBE Award for her services to the game of football. On and off the field, Sian Massey-Ellis is a leader and role model who inspires young women to participate in football, both as players and as referees.

Violet Palmer is a 20 year veteran NBA Referee who is retiring from on court duties this season. This week she was honoured by the Los Angeles Lakers team for her incredible career. As the first NBA female referee, Palmer has opened the door for women to officiate in men’s professional sports everywhere. Her strength of character and skill on the court has earned her the title of the NBA First Lady and this week’s Officials101 First Star.