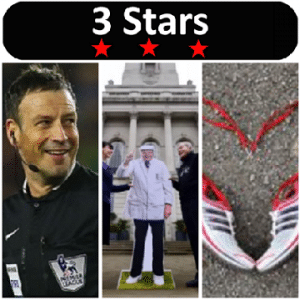 It was Valentine’s Day on February 14th. A day to celebrate the love in our lives. I have spent most of the last couple of months updating and building pages at the website, and Valentine’s Day was the perfect day to introduce The Love Collection. With all the negative posts on the internet about sports officials, I thought it would be fun to create a page showing the love in the lives of referees and umpires. This page of weddings and proud mamas and papas gets 3rd Star for the week.

Harold Dennis ‘Dickie’ Bird is a retired international cricket umpire from England. After many years as a player and coach, Bird had a long and colourful career as one of the most famous cricket umpires of all time, including 3 World Cup appearances. This week, the museum in his hometown of Barnsley, Yorkshire, is opening an exhibit to celebrate his achievements, and for that reason, Dickie Bird gets 2nd Star.

NEW: Howzat for a collection as Dickie Bird exhibition opens in Barnsleyhttps://t.co/5J9PoTxwrZ pic.twitter.com/OWoE45GJ6C

After officiating in the 2016 FA Cup Final, the UEFA Champions League Final, the EURO 2016 Final and winning the Globe Soccer Awards Referee of the Year, there is little dispute that Mark Clattenburg is currently the top football referee in the world. After some speculation earlier in the week that he was going to leave the English Premier League and PGMOL to officiate for MLS Soccer in North America, the football world was shocked at the announcement that Clattenburg would become the Head of Referees for the Saudi Arabian Football Federation. For this career move, Mark Clattenburg gets 1st Star for this week.