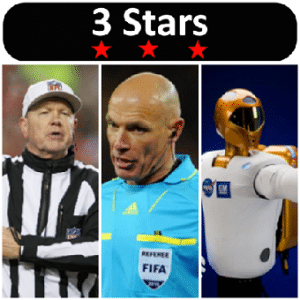 Umpire and referee weddings were big this week. There were 3 weddings in one week. I think there were only 3 weddings in the past year. It was also the Super Bowl on Sunday, so this week has a couple of party favours. Party posts always catch my eye for the 3rd Star, whether they are wedding parties or tailgaters, but this week, I saw this little feature about the NASA Robot doing football signals before the Super Bowl. We hardly ever get posts with robots in them, so NASA gets the 3rd Star.

Meet Robonaut who brushed off his referee skills for #SuperBowlSunday. Can you guess which signals he’s doing here? https://t.co/NxiiTa1lYq pic.twitter.com/md4IUrnUat

Howard Webb is one of the most recognizable referees in the world. He recently released his autobiography in a book called The Man in the Middle. I haven’t read the book myself, but by all reports, it is a great read. Last month Webb caused a stir when he visited the PRO offices, but no announcements were made at the time. However, this week, it was announced that Howard Webb was hired by PRO to oversee the implementation of the VAR, or Video Assistant Referee, for the 2017 MLS soccer season. For this, Howard Webb gets the 2nd Star.

As I mentioned above, it was Super Bowl Sunday for NFL Football this past week. Super Bowl 51 was an incredible game with a record setting, Tom Brady led comeback, that required the first ever overtime period to win the game. The game was watched by millions. Every play was carefully scrutinized and the pressure on referee Carl Cheffers and his crew was enormous. For calling a great game, and being able to slip away hardly noticed by the masses, Carl Cheffers gets 1st Star.

3 Stars 2017 Top Referees and Umpires in the world today:…